Pay and get paid via PayPal.

Why you should integrate PayPal into your site

PayPal is one of the most used online payment services in the world. Both businesses and freelancers love it – they can easily send and receive money from anywhere around the world, without having to move an inch away from their computer screens.

Even though there is a plethora of similar services, PayPal, nevertheless, stood the test of time and persisted. Paying special attention to safety, it quickly spread from desktop to mobile devices, becoming the most credited online payment service.

PayPal integration into your any commercial site or online shop is probably one of the easiest and safest ways to receive funds from your shoppers and potential customers.

Hire a professional digital agency to implement PayPal services into your website and therefore enable a large number of users worldwide to make their payments is an easy way.

What Is PayPal and how does it work

PayPal was founded in 1998 in the "Silicone Valley", Palo Alto, CA, USA under the name of Confinity (it was later merged with X.com). It was a wholly owned subsidiary of eBay from 2002 to 2015, when eBay and PayPal became separate companies. In 2014, it generated a total revenue of almost 8 billion dollars. It was written in C++ and Node.js programming languages.

PayPal allows its users to make financial transactions electronically, on the Internet, that is, to transfer their assets electronically, both between real persons and legal entities. Via this service, users can send to or receive payments from online auction sites, such as eBay, or shop and sell products and services, donate money or receive donations.

PayPal is available in 190 markets, with more than 179 million of active accounts worldwide. Its users can send, receive or store assets in 24 currencies.

In a nutshell, PayPal is the most widespread online payment system in the world.

The advantages of PayPal

Besides having the possibility of online shopping on global sites such as Amazon and eBay, PayPal is the preferred method of electronic payment for more than a quarter of users of online shopping. PayPal has the reputation of a safe service, protecting the interest of both shoppers and sellers. The users spend less time on writing their data and can make simple payments without having to pay in advance.

Online payments can seem obscure to many people, especially new users. Not only does PayPal allow you to withdraw money from other users, but it also offers the ability to charge your clients who pay via credit cards.

Users can send money using their email address or integrate a PayPal button on their website to make payments via online shopping cart. Having in mind that users put their trust into the very PayPal name and brand, having a PayPal badge on your site will give the site and your business full credibility. This corporation also integrated a smartphone credit card reader, so people can make payments no matter where they are.

Back in 2006, PayPal implemented a security token (security key) as an additional precaution against fraud. The account holder enters their username and password, but is also prompted to enter a six-digit code from their credit card and get a verification code for their account via SMS (which is sent to the holder’s personal mobile phone). These two additional requirements allow for better safety and prevent any malicious third party access private data.

Once you receive a payment via PayPal and access your assets, the allocation and using assets will be very simple. If PayPal is linked to your bank account, you can withdraw assets from the account within 3 to 4 weekdays. 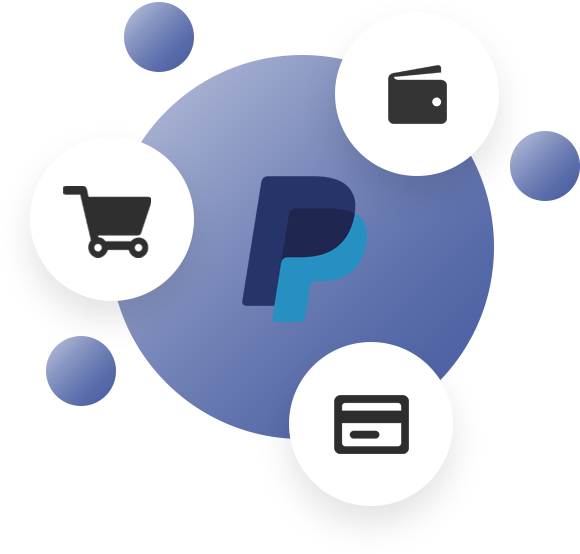 PopArt Studio can integrate your PayPal account into any web platform, so you can charge your services or products online.