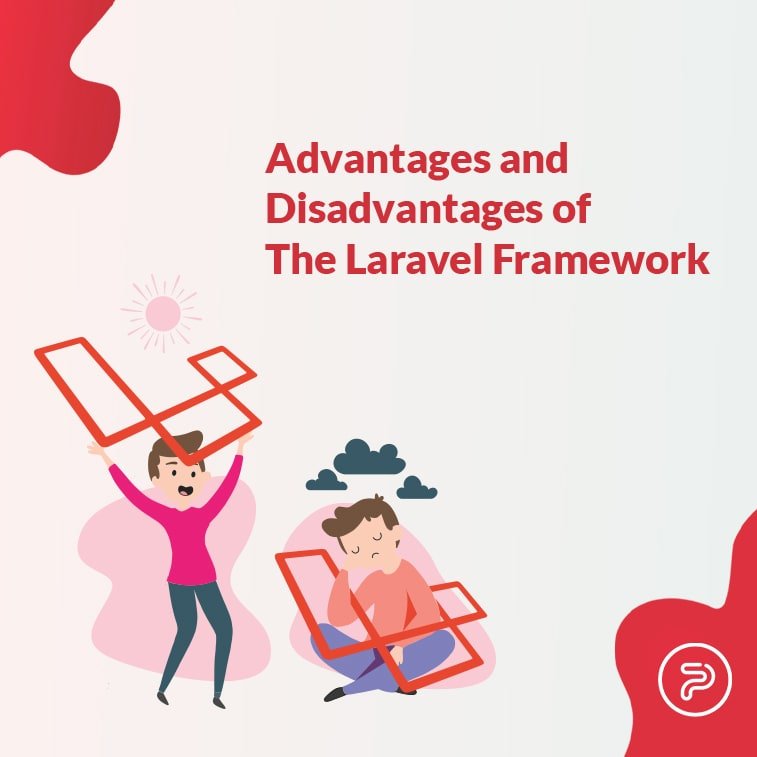 Almost all web developers know (at least, should) about Laravel. It’s one of the most prominent PHP architectures that follows the Model-View-Controller or MVC model. The free, open-source framework was designed by Taylor Otwell, and was launched back in 2011, currently running its 7.0 version launching on March 3rd this year.

Laravel is one of the most prominent frameworks on the market today, and with the PHP server-side programming language, it enables developers to focus on core fundamentals, with easy scaling options and quick development with codes that are easily manageable.

However, no framework is perfect. Each one of them comes with its own list of pros and cons and Laravel is no exception from this rule. In this blog post, we’ll give our best to give you a better picture of the framework discussing every advantage and possible drawback.

One distinctive benefit developers get from using Laravel is the fact that it incorporates all the latest PHP features. If you are thinking about giving Laravel a try, know that you will be able to use some of the best things PHP currently has to offer. Features like namespaces, overlaoding, anonymous functions, interfaces, and shorter array syntax. Also, with the introduction of the latest version, Laravel developers will also be able to use the Zttp Guzzle Wrapper package.

Each version of the framework was released with appropriate documentation, featuring comprehensive and easy to understand description when it comes to classes, approaches and code types. Such detail-oriented documentation is what makes the framework really developer-friendly.

Enabling you to create and set up multiple cache configurations, the framework fully support cache backends like Redis or Memcached.

This one can be a great selling point for most developers. Using Laravel can noticeably reduce the entire development cycle since the integrations are a lot quicker, plus, if you happen to get stuck, there’s a huge Laravel-user community out there, so the chances of getting all the answers to your questions are pretty good, before even thinking about reaching out to the framework’s dedicated support.

Shortening the entire development cycle can save teams’ time and money, and enables developers to become more productive, which, from a material standpoint, can be a lucrative route.

Laravel comes with its own integrated command-line interface. Artisan allows developers to build skeletal codes. It also controls the database system so developers don’t have to execute routine programming tasks. Artisan is also a great tool when it comes to generating and also maintaining simple MVC files with their respective settings.

Laravel is an MVC framework, which means that developers don’t need to use the old methods of writing entire PHP and PHP codes in the same files.

This feature is also very useful. It lets you create links within the structure to named routes. All you have to do is to use the name of the specific router when creating the links and the system will insert the requested URL automatically. Furthermore, if you find yourself changing the routes, you should know that the changes will be made automatically anywhere.

Remove tasks that are no longer relevant or unnecessary and place them in a queue to shorten user response time.

A good web application keeps its users up-to-date when it comes to the newest deals and offers, along with instantly registering new users. With Laravel, you can use drivers for SMTP, Mailgun, Mandrill, Amazon SES, Sednmail and SparkPost that enable sending emails either through local, or cloud-based services.

An Abundance of Packages and Resources

With Laravel, you can use npm and bower packages, if you choose to integrate the framework with Elixir or Gulp. This can especially become handy in the process of asset and resource revisions. Integrating it with the composer will resolve dependency issues.

Inversion of Control is a strategy which is used for creating a new object without the need of bootstrapping outside libraries. You can get the objects from any place you are coding, without ever having to need to manage unyielding solid structures.

With eloquent ORM, you can have a smooth ActiveRecord implementation to work with the database. In other words, this Laravel feature enables you to create models which have a corresponding table in the database. The ORM hosts built-relationships, meaning that when you change the table then the related data will change too.

You can use the following relationships:

This might be one of the best features of the framework, giving straightforward ActiveRecord execution when you work with databases.

Authentication with Laravel is easy an out-of-the-box feature plus, organizing authorization logic and control access to resources is also simple.

Testing with Laravel is a breeze since testing support with PHPUnit comes with the framework, along with the dedicated file already set up. Other included methods and principles also help with expressive testing providing you not just with simple troubleshooting options but also basic user simulations, like link clicking and form filling.

Lastly, with Laravel, exception and error handling come standard. And with the integrated Monolog logging library, developers have a wide variety of useful log handlers at their fingertips.

When compared to other frameworks such as Ruby on Rails and Django, Laravel has limited inbuilt support due to it being lightweight. This issue can be resolved though, with third-party tools, and you can get back on track as fast as possible.

PHP platforms in general have a few issues regarding versions with long-term supports and Laravel sometimes gets critique because of this. It’s true that updates may be able to cause minor problems, however, with the proper attention, developers can smooth out the process.

There are a few elements that could be a bit better. For starters, development involves heavy documentation, meaning, you do have to some experience  to get started with building an application. However, thanks to the Laravel’s dedicated support and the huge online developer community, these initial steps can be painless. Greenhorn programmers shouldn’t be discouraged to use Laravel since more experienced developers are always there to help them out and guide them.

Putting it all together

Generally speaking, there’s no perfect framework or for that matter, any piece of software. If there was one that’s perfect, everyone would be using that one.

In a PHP ecosystem, Laravel is certainly a dominant framework because it offers a large number of outstanding features which enable developers to build functional, fast and user-friendly web applications. It has a sleek and elegant structure plus an exquisite syntax. It can speed up the development cycle and integrates with mail services easily, with great documentation and it also supports the greatest PHP features.

On the other hand, just like every other framework, Laravel also has a few shortcomings, however, they are all simple to overcome. The lightweight structure of the framework sometimes requires third party assistance which isn’t a huge problem in itself. During upgrading and updates, developers should be a bit more cautious to ensure that everything goes smoothly. Lastly, It might be a bit harder for newcomers to figure out the nuances of the framework but luckily, they can always find help from either by dedicated support or from the large number of Laravel experts online. However, these are only minor things if we look at the bigger picture.

All in all, Laravel has its own set of pros and cons, like every other framework. However, it’s safe to say that in most cases, Laravel with its PHP-features and straightforward principles will provide everything developers need to create beautiful and functional web applications.

Szabolcs Szecsei
Szabolcs Szecsei born on February 4th, 1989, A Hungarian writer, living in Novi Sad, Serbia. With a master’s degree in Communication and Media Studies, Szabolcs has been working in the news and marketing industry for more than six years. Apart from writing, Szabolcs is also a professional touring and recording musician, working for several bands and projects.